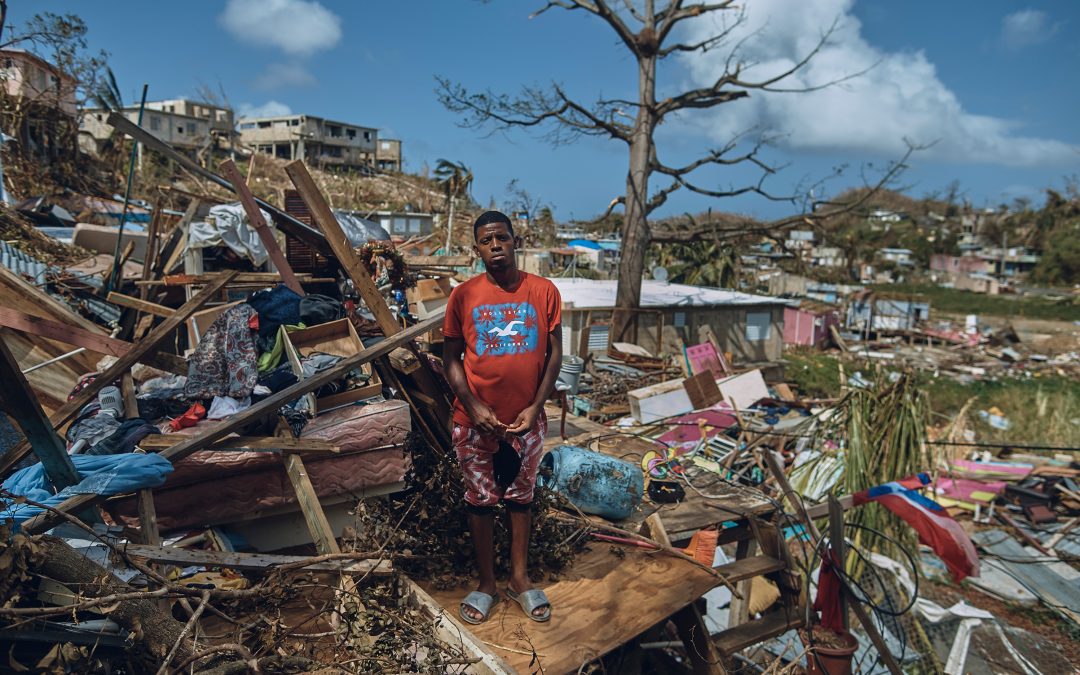 Disappointed, pained, hurt, heartbroken, concerned, frustrated, helpless, desperate, angry, and powerless; these are just some of the words that Puerto Ricans living in the United States use to describe how they feel about the events unfolding on the island in the aftermath of Hurricane María. The powerful category 4 cyclone made landfall on September 20, 2017 and pounded the island with a full day of heavy rains and violent maximum sustained winds of 155 mph. Entering through the southeastern city of Yabucoa and exiting through the northern town of Arecibo, María left no stone unturned in her destruction.

Puerto Rico’s residents hardly had time to brace themselves for their second hurricane in a month; the previous, Irma, had ravaged parts of the Northeast on September 7th. Nevertheless, nothing could have prepared them for the strongest storm to hit the island in almost a hundred years. The damage that it left behind has been described as “apocalyptic.” The entire population was affected. In almost the blink of an eye, electricity and communication were lost as the power grid was knocked out, towers and poles were literally swept away and smashed against the sides of buildings and strewn across the streets. Entire palm trees were uprooted and tree branches flung about, while billboards and rooftops became projectiles, killing anyone in their path. Rivers overpowered bridges, causing them to collapse, leaving whole areas inaccessible, and mudslides buried residents in their homes.

The Puerto Rican diaspora in the United States and all over the world watched in horror as their homeland was devastated beyond recognition. But perhaps the most frustrating ordeal was not being able to communicate with family members to find out if they were safe. Jose Acevedo, a resident of Maryland whose family is originally from Puerto Rico, has family living in Yabucoa, as well as other parts of the island. Although he was relieved to find out that his family was okay, he is still concerned for their wellbeing. He says, “Many lost their homes. The concern now is that they are running out of food, so although they survived the storm, the aftermath is very precarious.”

Acevedo, a well-known Islamic worker involved with Muslim youth and Islamic education, wanted nothing more than to help the victims of this unprecedented natural disaster, starting with his own family. He planned to travel to Puerto Rico with his father to rescue his stepmother and bring her back to the US. However, their flight was canceled. In fact, hundreds of flights were canceled as airports were shut down. Even until now the airports are not operating on a regular schedule, leaving many stranded on the island, and others unable to check up on their loved ones. “It is taking an emotional toll on me on a variety of levels: family members who are in a difficult situation and without communication, the island and its people overall and their condition. It is overwhelming and occupying most of my thoughts,” said Acevedo.

Hoping to help in whatever capacity, he reached out to Islamic NGOs that were planning to offer aid to Puerto Rico. One of these was ICNA Relief, which connected him to an initiative called the 3 Puerto Rican Imams Project. As the name suggests, this project is spearheaded by three Puerto Rican Muslim leaders living in the US, Imam Abdullah Daniel Hernández from Pearland, Texas, Imam Yusuf Rios from Cleveland, Ohio, and Imam Wesley “Abu Sumayyah” Lebrón from Passaic, NJ, with the goal of collecting funds to distribute aid to the areas that were most affected by Hurricane María. They also count on several Puerto Rican Muslim volunteers, as well as Muslims from a variety of nationalities who have unified for the cause. In collaboration with ICNA Relief, they joined a team traveling to Puerto Rico to assess the damage and plan the best strategy for delivering donations.

There are conflicting reports coming from the news media and the White House about the current situation in Puerto Rico, a territory of the US. Usually when any natural disaster strikes on US soil, the response is decisive and quick. However, this has not been the case with Puerto Rico. President Donald Trump has explained that it is a logistical challenge due to it being an island, but they are still managing to do an excellent job in responding to the people’s needs. On the other hand, the islanders claim that aid has been either slow or nonexistent. Some mayors have been vocal in expressing their frustration about not having enough food or water for their townspeople, while the governor of Puerto Rico, Ricardo Roselló believes that Washington has responded favorably to the humanitarian crisis.

Rios, one of the three imams, was on the ground with CAIR Florida spokesperson, Attorney Wilfredo Amr Ruíz, who is also Puerto Rican, originally from the town of Aguadilla. They confirmed that there is some truth to both sides. Indeed, aid in the form of donations and equipment is reaching the ports of Puerto Rico, however, these items are not being distributed to those people who need it most. The lack of diesel fuel also creates a problem for truckers and drivers of heavy machinery for pickup and trash removal. For the most part, it is the people themselves who are cleaning up the debris in the streets and clearing roads. “Locals in many instances cleaned up their own streets without much support from government. In some cases, residents received no support. There are complaints of a lack of aid coming from the government (overall),” said Rios.

For more than a week, the island seemed to be completely shut down; even hospitals were left without electricity or water, putting at risk their most critically ill patients, like those on life support, oxygen, and dialysis, as well as infants. Until now, almost three weeks after Hurricane María struck, some hospitals remain inoperable, not all gas stations are open, supermarket shelves are empty, and food and water are scarce. Residents are bathing and washing their clothes in streams and collecting rain water for daily use. Price gouging has been a huge issue, with soaring prices for basic necessities such as drinking water and baby formula to other essentials such as gasoline and airfare for those attempting to escape the deteriorating living conditions.

Imam Wesley Lebrón, also known as Abu Sumayyah, has family living in all four corners of the 100-mile x 35-mile island. The roof of his aunt’s home flew off during the storm and her second-floor apartment was completely destroyed, leaving the first floor exposed to rain water which seeped in to ruin much of her furniture. This ordeal has shaken Lebrón. “The reality of knowing that my family could have been dead, may not have food to eat, and may be thirsty, is something that kept me awake even when I was asleep. Worrying about the state of my people and Island wondering when they will be able to return back to a normal state are thoughts that run through my mind daily,” he said.

As part of the 3 Imams Project, he plans to travel to Puerto Rico on October 16 to offer aid wherever he can. The reaction among Puerto Ricans living outside the island, like Lebrón, is that they must take matters into their own hands. Donation drives and crowdfunding campaigns have been in full swing even before the hurricane made landfall. However, now that federal aid has been lagging, the outrage people feel from the outside looking in has served to galvanize not only the diaspora, but Latinos in general. Lebrón says, “I hope that this project will be something that joins hearts, minds, and souls together for a beautiful cause: service to humanity. I hope that it is something that started because of a tragedy, but (it) develops to be something that can continue to serve the needs of the Puerto Rican people, specifically, and a tool that could also be used by the Latino Muslims in general.”

Proud, faithful, resilient, awakening, and pa’lante (moving forward), these are the words that Puerto Ricans have also used to describe the Boricua (native islander) spirit after Hurricane María. The cyclone brought with it devastation unlike anything Puerto Ricans have seen, but it has also brought with it solidarity and unity that is unprecedented. The slogan for Puerto Ricans living inside and outside of the island has been “Puerto Rico se levanta” which means “Puerto Rico will rise.” This is both a call of hope, and a promise. For those helpers collecting aid and mobilizing the relief efforts, they will be the hand extended to help their brothers up.